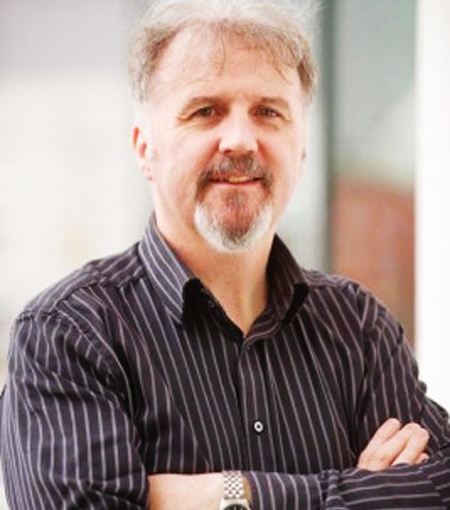 Self Help Africa’s Ronan Scully will receive the 6th Oireachtas Human Dignity Award at a ceremony in Leinster House on Thursday, 1st December.

This Award is presented by the Oireachtas Human Dignity Group to a person or group whose commitment to the promotion of human dignity is exemplary. Ronan Scully is being honoured for his many years of service to others, both as a volunteer and professionally, in some of the world’s poorest countries, as well as his commitment to youth education and development.

Since 2010, Ronan has worked with Self Help Africa. Prior to that he spent 18 years as a volunteer and employee with GOAL. Over his career, he has raised millions of euro for various charities committed to human development and famine relief in Africa and Asia. He works regularly with projects in Ethiopia, Sierra Leone, Kenya, Uganda, Zambia, Malawi and India.

“In honouring Ronan Scully, we are honouring a great tradition of Irish people working to alleviate human suffering across the planet,” says Ceann Comhairle Seán Ó Fearghaíl TD, who will present the award at the request of the Oireachtas Life and Dignity Group.

Independent Senator Rónán Mullen, who proposed Mr Scully for the Award, described him as “a person of energy, enthusiasm, faith and hope, dedicated to improving people’s lives in the toughest parts of the world.”

“Ronan Scully is also known for his sporting and cultural contribution,” Senator Mullen added. “He has been Offaly Sportsperson of the Year, was a leader on RTÉ’s Operation Transformation, has authored two books and writes a weekly column for three regional newspapers. In all he does he motivates and helps others to improve their situation by pointing to what is important in life and helping them to reach for that, as he does himself. In that sense Ronan is a ‘renaissance man’,” Mullen said.

The Award is due to be presented to Mr Scully by An Ceann Comhairle, Seán Ó Fearghaíl TD at a ceremony in Leinster House on 1st December, to be attended by members of Mr Scully’s family, representatives of Self Help Africa, members of the Government, Dáil and Seanad.

About Ronan Scully:
Ronan Scully grew up in Clara, Co Offaly, the son of Ricey and Mary Scully. He attended St Francis National School and Árd Scoil Chiaráin Naofa Vocational School in Clara before attending Maynooth University where he qualified in Philosophy/Theology and Arts.

From 1992 until 2010 Ronan worked with GOAL before joining Self Help Africa, for which he now works as Western Regional Representative.

While with GOAL he worked in Calcutta (Kolkata), in India, as well as in Nepal, Ethiopia and Angola. He also spent a number of years working with and supporting Mother Teresa’s Missionaries of Charity in their work in Romania, India and Ireland.

Over the years, Ronan has fundraised tirelessly for local and international charities. He is a founding member of the Maynooth Charity Cycle which has fundraised €2m for Irish children’s charities. He played a key role in founding the WorldWise Global Schools Development Organisation, managed by Self Help Africa with support from the University of Galway and Maynooth University.

Ronan was sent by Self Help Africa to Ukraine earlier this year to assist the humanitarian situation caused by the Russian invasion in February 2022. He has also worked in Ethiopia, Kenya and Uganda this year.

He has received numerous awards for his community, voluntary and humanitarian contribution, including:

Ronan was also Offaly Sports Star of the year in 1988. He lives in Galway with his wife Jacqui O’Grady and two daughters, Mia and Sophie.

Mission Statement: Believing in the equal dignity of all human beings and stressing the continuum of human life, the Oireachtas Human Dignity Group provides a forum for Members to discuss and inform themselves on issues relating to the most fundamental human right, the right to life.

Objective: The Human Dignity Group takes an evidence-based approach to promoting respect for human dignity at all stages of life. We host talks, presentations and testimonies on a wide range of issues. In a spirit of respectful dialogue, we want to promote awareness, enhance debate and inform policy.

Membership is informal, and the Group’s activities are open to all Members of the Oireachtas and MEPs who share these aims and are interested in participating.
The decision to present the Human Life, Human Rights and Human Dignity Award (Human Dignity Award) to Ronan Scully was proposed by Senator Rónán Mullen and agreed at the October 2022 meeting of the Group.