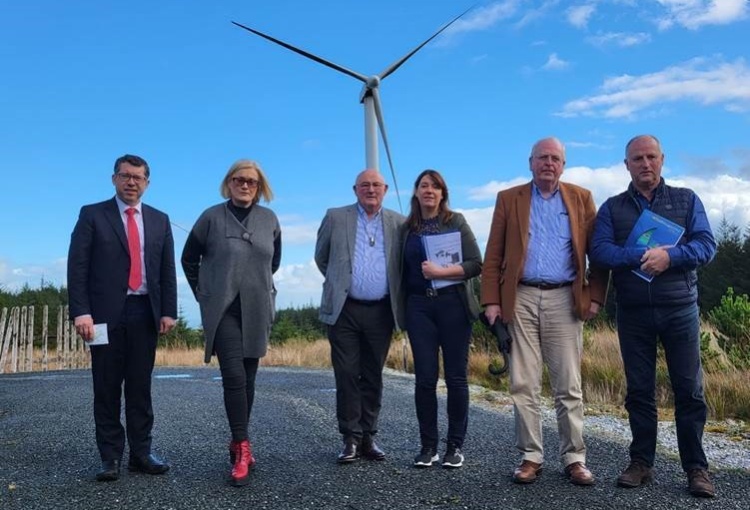 Independent Senators visited Derrybrien Wind Farm in County Galway on Friday, 14th of October, ahead of a legislative proposal that will attempt to stop the site from being decommissioned.

Senators Michael McDowell, Victor Boyhan, Gerard Craughwell, Sharon Keogan, Rónán Mullen and Gort Councillor Geraldine Donohue were all in attendance. The Independent Senators spoke with the manager of the Derrybrien Wind Farm, Joe Knight, and staff members during their visit.

Senator McDowell who previously condemned the government’s handling of the Derrybrien controversy said the following, “The environmental damage from decommissioning would be very substantial, we saw today that most of the vegetation has recovered since the natural disaster. I don’t hear anything from the European Court saying that the wind farm has to be knocked down. There’s nothing in the 2019 ruling saying that this has to happen.”

He continued to say, “The issue of substitute consent is complicated by the fact that under EU law a person cannot benefit from a wrong except in very exceptional circumstances. If a toll bridge built over 20 years ago was found to be in violation of EU law, the solution might not be to tear the bridge down but to penalise the developer and the owner. There’s absolutely no case for knocking it down and starting it again.”

Senator Boyhan who was keen to emphasise that the visit was a fact-finding exercise said, “The site visit was very beneficial and allowed us to meet the personnel on the ground. It would be sheer madness to dismantle 70 wind turbines capable of powering over 40,000 homes to do so now would require planning permission and appropriate assessment in line with planning and environmental laws – the challenge is to now find a solution to the long-running saga of Derrybrien. There’s been a lot of wind-bagging in relation to this issue.”

Senator Keogan from County Meath commented during the visit to Derrybrien saying, “It makes absolutely no sense to have the wind farm decommissioned in the middle of an energy crisis. It’s ridiculous beyond belief. The Green Party should be ashamed of themselves.”

The legislative proposal is expected to be published later this month. A number of options are being considered such as vesting all interest in the lands at Derrybrien Wind Farm into the Western Development Commission. This would include all freehold and leasehold interests and all the plant, machinery, infrastructure and ancillary works. It would require amending the  Western Development Commission Act 1998.