Education Committee may quiz colleges on links with Chinese universities 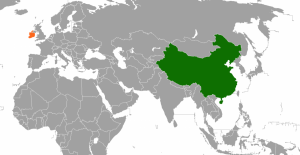 The Oireachtas Education Committee may invite Irish university heads to explain their developing links with Chinese universities in light of human rights concerns for Chinese academic staff and students in Ireland, and for Irish staff and students based in China.

At a meeting today, the Committee agreed to a proposal from Senator Rónán Mullen that Irish university links with China be added to the Committee’s work programme.

Senator Mullen drew particular attention to the developing partnership between University College Cork and Minzu University in China. UCC is considering an application to the Chinese Ministry of Education aimed at developing a ‘joint college’ with Minzu which would deliver degrees in science, engineering, food science and law.

Senator Mullen highlighted the case of Ilham Tohti, a Uyghur professor of economics at Minzu sentenced to life in prison in 2014 for the crime of ‘separatism’. Evidence gathered from his lectures at Minzu was used in his trial, which lasted just one day. Seven of his students were arrested and sentenced to various terms in prison for attending his class or for things they said in class.

“Given how carefully students and faculty are monitored in Chinese universities can any Irish university say with absolute certainty that nothing similar could happen to Chinese students here taking a dual degree programme?” Senator Mullen asked. “And what of the position of Irish staff or students who might make political comments adverse to the Chinese Communist regime based in China?”

Given the centrality of academic freedom to the university experience, the Oireachtas Education Committee should inquire into these developing college partnerships and hear from those involved, including representatives of the Chinese authorities, Mullen proposed.

The Committee agreed to write to the Minister for Further and Higher Education, Simon Harris TD, in the first instance to ascertain the Government’s views in the matter, before considering further steps. Agreeing to this, Senator Mullen pointed out that the Committee, as a separate branch of the Oireachtas, might have a different set of priorities to the Government which was “very anxious” to keep the focus on trade with China.

“I would be concerned that this proposal wouldn’t disappear down the swanny of the Government prioritisation of trade,” he said.

In November, a motion from Senator Mullen calling on the Government “to use all available trade and diplomatic channels, including the United Nations Security Council” to pressurise China to end the oppression of its Uyghur minority.