Christmas greetings — a reflection and some news 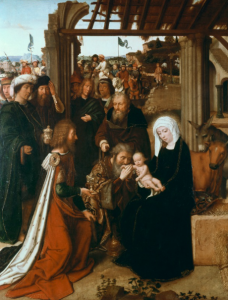 I hope this finds you well. It is hard to know what to say to friends and correspondents this Christmas. People’s experiences of this strangest of years have been many and varied. But as I look back at the Christmas e-card that I sent last December, I am struck by the fact that I composed it in Portiuncula Hospital in Ballinasloe at a time when my Dad was very sick and we were all struggling with having to wear face masks to avoid getting or transmitting infection.

We are all used to face masks now. My Dad is well again, thankfully, despite his advanced Alzheimers condition, and is with us at home. I sympathise with all those whose loved ones are in nursing homes or hospitals and can’t be visited easily or at all — with or without a face mask.

I lost a dear friend earlier this year, before the Covid outbreak took hold. This time last year, Sr Dympna Stack, founder of Holy Rosary College, Mountbellew, where I went to secondary school, was in her early 90s and full of heart despite her diminishing physical capacity. She became ill, however, in the new year just as news of the pandemic was beginning to spread. Dympna’s time had come. She had a peaceful death and her Sisters were able to visit her briefly before she departed.

Sr Dympna did so much for so many. One of her successors as Principal, Maureen Walsh, recalled how, back in the day, she had visited families, encouraging and cajoling, organising transport and doing her utmost to keep young people going to school who were thinking of the emigrant boat. She changed people’s lives for the better.

There was a modest but respectable crowd at her funeral — nothing to the crowd there would have been in normal times with people free to pay their respects. This was just another of the many casual cruelties of Covid-19 during the year. Other people have been more profoundly affected, of course. Hopefully, we can commemorate Dympna’s life properly when normal times return. Ar dheis Dé go raibh sí.

Thanks to all those who supported my re-election to the Seanad this year and who have been kind to me in various ways. We will have a gathering and celebration in 2021 as soon as the times permit. I am looking forward to that too.

I hope you like this year’s Christmas image and poem choice. I haven’t been ‘gallivanting’ this year, obviously, so there is no personal connection to the image I have chosen. But Gerard David’s Adoration of the Magi depicts a large gathering at the stable in Bethlehem, testimony to the importance of this moment in human history. The extract below from Anne Brontë’s Music on Christmas Morning reflects on the writer’s delight in Christmas music. Her words evoke the significance of the Christmas event which overcomes all darkness and brings joy to the world. There are some notes on the image and the poem below.

– I hope to send you a newsletter early in the new year, with some details on what I have been saying and doing in the Seanad and elsewhere.
– For some good new year’s reading, I recommend Modern Culture & Well-being – Towards a Sustainable Future  edited by a friend of mine, Dr Catherine Conlon. See below.
– And now for some Christmas mindfulness: an old college buddy of mine and dear friend, Fr Donncha Ó hAodha, is giving a Christmas reflection on Christmas Eve at 7 p.m. Just the thing to get into the spirit of the great season. You don’t have to leave the house. There is plenty of ‘zoom at the inn’ so feel free to pass on this link to others: https://us02web.zoom.us/j/85446445231

Finally, if you are still reading, I would like to wish you and yours a joyful Christmas, despite the challenges of these times. May you enjoy good health, and be of good heart, throughout the year to come.
Le míle buíochas agus gach beannacht,
Rónán Mullen

From Music on Christmas Morning by Anne Brontë

Though Darkness still her empire keep,
And hours must pass, ere morning break;
From troubled dreams, or slumbers deep,
That music kindly bids us wake:
It calls us, with an angel’s voice,
To wake, and worship, and rejoice;

To greet with joy the glorious morn,
Which angels welcomed long ago,
When our redeeming Lord was born,
To bring the light of Heaven below;
The Powers of Darkness to dispel,
And rescue Earth from Death and Hell.

A sinless God, for sinful men,
Descends to suffer and to bleed;
Hell must renounce its empire then;
The price is paid, the world is freed,
And Satan’s self must now confess
That Christ has earned a right to bless:

Now holy Peace may smile from heaven,
And heavenly Truth from earth shall spring:
The captive’s galling bonds are riven,
For our Redeemer is our king;
And He that gave his blood for men
Will lead us home to God again.

Adoration of the Magi by Gerard David, c. 1500, Oil on oak, Musées Royaux des Beaux-Arts, Brussels. Gerard David (c. 1460–1523) was a painter and manuscript illuminator who worked in Bruges for most of his life and was known for his brilliant use of colour. The story of Christ’s nativity in St Matthew’s Gospel gave rise to various medieval stories from which artists took inspiration. In this painting the stable is set in the ruins of a palace and the numerous visitors depicted at the scene represent the importance of the event. The visit of the magi means that Christ’s coming is good news for the whole world, for Jews and Gentiles alike. The dignitaries represent the three ages of life but also the known continents at the time, Europe, Africa and Asia. They offer gold, frankincense and myrrh, symbols of Christ’s kingship, divinity and sacrifice.

Anne Brontë (1820–1849) was a British novelist and poet — the youngest of the three Brontë sisters. Her poem Music on Christmas Morning reflects on Christian values and the meaning of the Christmas season. Anne enjoyed the celebrations of Advent and particularly the music of Christmas in her father’s church, a short walk from the parsonage where the family lived.