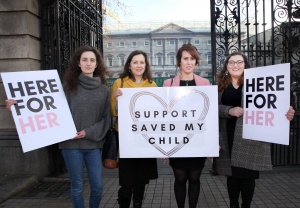 The news emerged at a briefing held by Minister Simon Harris for members of the Oireachtas Health Committee about progress on the Government’s stated intention to legislate for exclusion zones near abortion facilities.

In his letter to Minister Harris, the Garda Commissioner confirmed his “satisfaction with existing public order legislation to adequately deal with any reasonable public order incident that may arise at such centres. I re-confirm my views expressed at our recent meeting that protests to date at such centres have not contravened the law and are peaceful.” There was “no evidence to suggest that there is threatening, abusive or insulting behaviour directed towards persons utilising those services,” the Commissioner added.

Welcoming this news, Senator Mullen said it was now clear that calls for exclusion zones had nothing to do with concern for the welfare of women. “In fact, it is about the opposite. It is about crushing any public dissent, however peacefully and respectfully expressed, over abortion. It is about preventing women who may well be conflicted, harassed, pressurised or rushed into approaching abortion services from hearing about positive, live-saving options that might benefit them and their unborn children,” Mullen said.

Speaking afterwards in the Seanad, Senator Mullen recalled the words of Ms Alina Dulgheriu of the Be Here for Me organisation which maintains a peaceful presence about abortion facilities and offers alternatives. Ms. Dulgheriu addressed a meeting in the Oireachtas last February at which she spoke about her own experience of a positive encounter with a pro-life witness when she attended an abortion clinic. “‘All I needed was someone to tell me I could get through this,’ was what Ms Dulgheriu told us”, Senator Mullen said.

“Her child’s life was saved and she now offers help to others. These are the ‘Good Samaritans’ that Minister Harris would like to criminalise,” Senator Mullen said.

“It is clear that Minister Harris, in telling us today that he still wishes to legislate for exclusion zones, is just clinging to ideology, but he had no option but to share the unwelcome news from the Garda Commissioner that his cherished legislation isn’t actually needed. The Minister’s claim that he has not received legal advice that he cannot legislate to restrict protests, shows the weakness of his position. The Minister was unable to acknowledge himself that European Court of Human Rights caselaw might well create problems for his plans to restrict pro-life expression.”

Senator Mullen reminded Minister Harris at the meeting that, following the Open Door Counselling decision of 1993, women going for abortion services might be held to have a ‘right to receive information’, a right which the Minister’s proposed legislation would also endanger.

The meeting concluded with the Minister committing to inform Gardaí and abortion providers nationwide about the existing public order legislation. “I invited him to commit to meeting people who could tell him about best practice in offering support to women approaching abortion facilities. The fact that he refused to engage in any such consultation shows the space that he is in,” Mullen concluded.